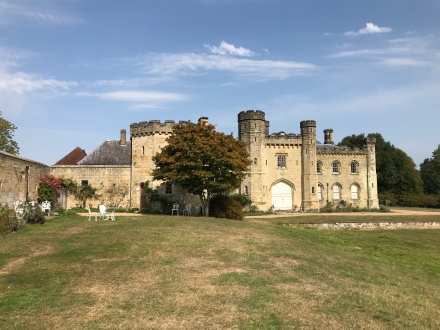 A Lazy Day in Kent 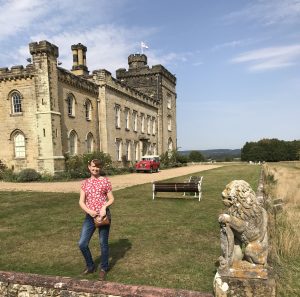 The Castle and a gargoyle
(I’m the one in red!)

We had a few hours for an outing and decided to visit Chiddingstone Castle. This is one of the few local attractions which is actually open on Tuesdays—except only the grounds are open, the house is open on Sundays and Mondays. We have never visited before, despite it being practically on the doorstep, so we explained to the dog that we were leaving her at home (not quite sure why I always need to explain to the dog why I am leaving the house without her) and off we set.

Chiddingstone is between Tonbridge and Edenbridge, and is a tiny Tudor village. We parked in the castle grounds, put our £2 entry fee in the honesty box, and began to wander.

The castle is pretty, with turrets and the remains of an orangery. There are wooden bridges over the river, and ducks on the lakes and expanses of lawn (so I could have taken the dog, but she would have had to stay on the lead). There was an area set out like an Egyptian garden: The Fields of Eternity—though to be honest this was just random pathways cut into long grass, and the area meant to resemble Tutankhamun’s tomb was simply a sand tray that had been well used by the local cats. I didn’t see any actual garden as in flower beds, but perhaps they are within the walls and only accessible when the house is open.

The castle was originally a Tudor house. Then, in the 1800’s it was bought by Henry Streatfeild (all those vowels are the wrong way round, so a difficult name to write.) He demolished the old manor house, replaced it with a castle and diverted the road so none of the villagers could go on his land. I bet he was popular! Though to be fair, I share his desire to have turrets on my house.

In 1955 the castle was bought by Denys Eyre Bower (no relation to Jane) and he was a great collector of stuff. He set up collections of Egyptian antiques and various art collections, which he displayed in the castle for people to see (more popular with the locals than Henry Streatfeild I’m guessing). When he died in 1977, a charitable trust was set up to preserve his collections and continue showing them. I’m thinking of copying this idea with my cushion collection, my children will be thrilled.

We left the grounds and wandered up the main road of Chiddingstone. There was a narrow path, an old church, and classic Tudor houses. The village shop is full of gifts and frozen Cook food and sweets in old-fashioned jars (maybe more of a shop for people renting holiday homes than people actually living in the village).

The village has been bought by the National Trust. In Tudor times, the father of Anne Boleyn (of beheaded fame) owned property here. Currently the village is often used by film companies who want an authentic Tudor setting.

There is a school, which we passed at Playtime and was particularly noisy. The children were all wearing coloured caps, segregated into coloured pens, with coloured equipment and an appropriately coloured-clothed teacher standing guard. They are clearly attempting to be covid-aware, though whether the children all clustered in a tree were social distancing was uncertain.

We also found the Chidding Stone—the footpath there is marked by a signpost on the main road. A big lump of granite, people have been guessing its connection to the village name for centuries. Theories include: Used by the Druids as a religious place, or the place of judgement—nagging wives and petty criminals were taken there for general ‘chiding’ by the village, or a Saxon boundary, or the homestead of Cidda’s family—hence ‘Chidding tun.’ In the 12th century the village is listed as Cidingstane, so take your pick. I favour the chiding stone theory, and when you visit you can imagine the whole village standing round it to shout abuse at a nagging wife.

Chiddingstone village and castle is a fun place to visit if you have a couple of hours free and you happen to live in Kent. Next time we’ll go when the house is open, and I can get some ideas for the best way to display my cushion collection.

I hope you have a nice day too. Take care.

Next week I will tell you all about the start of my new course at college, learning ancient Greek. It is such fun!

One thought on “Visiting Chiddingstone Castle and Village”