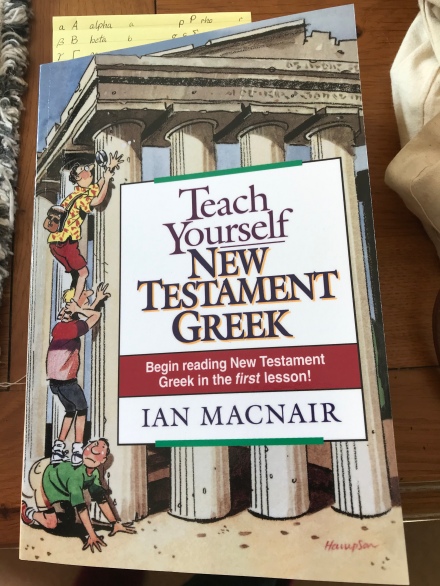 As I write this, it is one more week until my Greek exam, and to be honest, I am fed-up with revision. My sons inform me that I started too early, and that the night before the exam is the optimum time to start revision. I fear they may have inherited my work ethic.

As a teenager, I never revised for exams (which is probably why I never scored very highly). For my O’level exams (GCSEs if you’re young) the school said we could choose to either revise at home or in school during the weeks of study leave. I saw this as the perfect opportunity, and told my parents I would study in school, and told the school I would study at home. No one checked. (Sorry Mum, you might not know about this.) I spent the days having fun (I remember a day trip to Cambridge). My exam results were nothing to be proud of.

I seem to remember that I did study a little better for A levels and my degree, but in a rather half-hearted unfocussed way. I am therefore determined that this time, with what might be my last attempt at academia, I am going to do it properly. But Oh! it is very boring.

There is nothing at all interesting about looking up things that I sort-of-mostly-know, and writing lists and reading pages (that I have already read) so that I know it properly. It is also not at all what we do in real life. I sort of remember lots of recipes, but when I bake something I tend to look up the finer points (like the quantities of ingredients). I never spend a week writing lists and committing the quantities to memory so that I can dispense with the cookery books, even though it might save time in the long run. People don’t do things like that. We don’t memorise our mobile phone number, or the names of all the roads to the seaside, or how many grams of flour go into the cake. We understand how things work and look up the finer details when we need them. Which makes me feel that exams are more tests of memory than ability. But perhaps that’s because I have never been very good at them.

In order to give myself some light relief, I have started to dip into the Hebrew course. I don’t actually start Hebrew until February, but the course book appeared online, so I bought a copy. It begins with the alphabet, so in-between revising Greek, I am learning the Hebrew alphabet. Learning is so much more interesting than revision. My main trouble at the moment is that I have thoroughly learnt that a ‘v’ sounds like an ‘n’ (in Greek) and I now need to unlearn this so I pronounce one of the Hebrew letters correctly (it sounds like ‘vahv’ but I keep saying ‘nahn’!)

I have also bought an English grammar book. It was recommended by Robert Plummer, who wrote one of the Greek books that I have found useful, and it explains all the English grammar that I failed to learn at school (possibly because I had skived off for the day to Cambridge) like what an indirect object is and what ‘pluperfect’ means. It arrived today, and is smaller than expected. This often happens with books—they are recommended, and look interesting, so you pay more than usual—but then what arrives is little more than a pamphlet in a glossy cover. I am hoping the value of the content makes up for the lack of pages, but I might have been scammed. I also bought a children’s book: First Hundred Words in Hebrew. It has pictures. I shall leave it in the loo and glance at it whenever I am in there, hoping to absorb the occasional word.

Another book that I started to read (you can see just how badly the revision is going—my house is very clean too!) is called: The Moral Vision of the New Testament by Richard Hays. It was a Christmas gift, and I haven’t read much, but it’s very interesting so far. It starts with the letters by Paul, because they were written before the Gospels (the books Matthew, Mark, Luke and John). I have never thought about that before—when Paul wrote his letters, the church didn’t have any of what is now the New Testament. He possibly didn’t even know some of the stories that we know today. Hays also makes the point that when Paul wrote his letters, the people were expecting that at any minute, Jesus would return and the world would end. They really were not expecting that 2,000 years later we would still be here, reading his letters and trying to figure out how to live. Paul wrote things that were imminently important rather than long-term ethics/rules to live by. I have never considered that before.

It’s always fun when a new idea is proposed and you can think about it and decide whether or not to agree. Much more interesting than revision anyway.

Hope you have an interesting week.

One thought on “Revision is Boring”