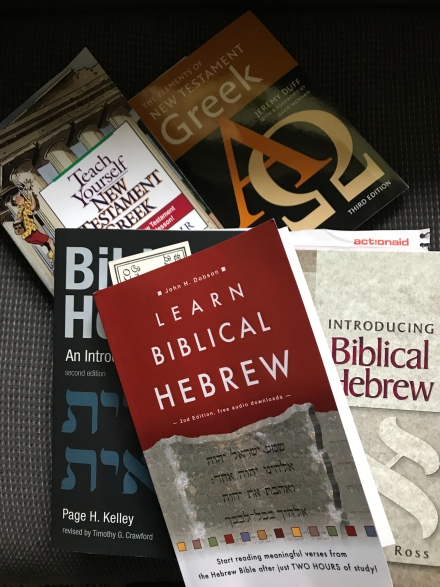 As I continue with my language studies, I have bit of an on-going battle with the textbooks. I realise that this is my problem, rather than the authors’ and is mainly due to my rather poor formal-English education. I was educated in an age when English lessons were about expression and creativity, with not much grammar mentioned. This wasn’t necessarily wrong–I now write novels, and the marketplace is overwhelmed by people my age who are putting that creativity into action. But when it comes to learning a language, it is fairly useless.

My problem is understanding what exactly the textbook is trying to say (the English bits). For example, I am faced with a chapter that begins:

Pronominal suffixes attached to nouns function as genitives, much like absolute nouns in construct relationships.

I stare at the words. I can read the words. I can say the words. But understand them? Not at first glance. My brain has to unwind the language and remind myself that a ‘pronominal suffix‘ is simply ‘random-people-related letters added to the word’ and a ‘genitive’ is simply the word that owns/possesses the other word, and so on. I can get there, but by the time I have decoded the English, I am ready for a break.

I have also discovered that when faced with sentences I don’t understand, my mind sort of goes into shock, and I absorb absolutely nothing. People need to be relaxed in order to learn, and lots of poncy language makes me stressed.

There are of course, textbooks that are more friendly, but they have their own problems. For our Greek lectures, we use a book by Macnair, and he writes in a very folksy manner, describing verbs as ‘slimming-club verbs’ because they lose letters, for example. This was lovely when I started learning, as the information was very accessible. However, when I came to revise it was a nightmare, as I wanted to skim the chapter on ‘liquid-verbs’ and I couldn’t extract the information from the storybook style of writing.

I think the only answer is for me to have a selection of textbooks. I do need the very formal one, because the exam is written in formal language, and I am expected to behave like a linguist. But when I am learning new grammar points, when understanding is the main aim, then I need a friendly book. For Hebrew, I have found a book by Dobson, which explains the grammar gradually amidst a jumble of reading and this suits the way I learn. I need to use the language in order to learn it, I find learning grammar in isolation to be almost impossible. The formal textbook by Ross will teach something, and then give lists of words (paradigms) to be learnt, but without saying what the words in the paradigm actually mean. (I have scribbled the meanings next to the lists of symbols–otherwise that is all they are–lists of meaningless symbols.) In contrast, the book by Dobson will give an extract of Hebrew text to read, and then points out a few minor grammar points. The order is jumbled, but the information is easily assimilated.

My other problem at the moment is trying to learn lists of Hebrew words (because unlike the Greek exam, we are not allowed to use a dictionary). My memory is pretty rubbish, so every list of new vocab represents many hours of work: writing, reciting, lists on the fridge, letters on my fingers, chants when we jog. Not sure whether I will get there, but I am determined to give it my best shot.

I hope you have something interesting to work on this week. It seems to me, that the most rewarding things usually require an uncomfortable amount of effort–but it’s worth it.

One thought on “The Trouble with Textbooks”