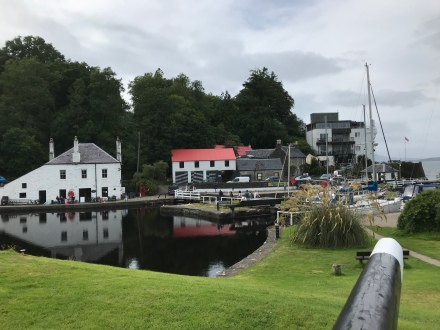 The Crinan Hotel is two hours north of Glasgow. There’s not much phone signal, so Google maps gets confused and places the hotel round the corner, whist it actually has prime position overlooking Loch Crinan off the sound of Jura (look at a map of Scotland, and it’s on the left, about half-way up).

We arrived early afternoon, and followed the winding lane past whitewashed cottages down to the canal, then up to the bend in the road—which is basically the whole of Crinan in a single sentence. There were signs on the hotel door requesting that guests wore facemasks in the hotel, and lots of other signs and photographs and paintings, all muddled together in a visual feast of nostalgia. You knew instantly that this hotel was personal to someone, and they loved it.

We checked in, and dragged our cases into the tiny lift (which closely resembled an upturned freezer). Our room was on the second floor, and the metal key was attached to a large, too-big-for-a-handbag wooden fish. The room was lovely, with a large window overlooking the loch. There was wooden furniture, and uneven floors, and a single vase with fresh flowers. In the wardrobe was a tray set with tea things and a tiny kettle, with a note telling us to ask reception for fresh milk. Everything looked clean, cosy, and slightly dated. I loved it. Very Miss Marple. All we needed was a body in the lobby and we would be in the quintessential English novel.

There was no safe in the room, but it all felt very secure so we left our stuff and wandered along the tow path. Husband loves canals, and enthused happily about how many locks would be needed for the boats to climb the hill behind the hotel, and why they had built the entrance to the 9-mile canal in Crinan, and not further round the coast (later investigations showed the water was a giant sandbank, so the canal needed to provide deep water from Crinan onwards). It was easily ignored as cheery background noise while I absorbed the water birds, and reflections on the loch, and the absolute peace of the area.

We ate dinner in Tayvallich (quite an adventure, but for another blog). Spent the evening trying to find Duntrune Castle, which the room information said was opposite the hotel, but all I could see through the binoculars was a big house. Went to bed. Slept well.

The following morning started at 6.30 when the people in the next room began to stomp across the creaky floorboards and turned on the noisy fan in their bathroom. The night had been silent though, so no complaints. We got up and ran along the towpath. Good shower (always excellent when an older hotel installs a decent bathroom) and then we went down for breakfast.

The dining room has bay windows overlooking the loch, and it was simply beautiful. Everything was very hushed, with thick carpets and heavy curtains, damask napkins and silver coffee pots. The waitress brought us juice and good strong coffee and took our order. I opted for porridge and fruit, Husband went the less healthy route—though neither of us were tempted by the kippers. There were a few other guests, but it all felt very proper, with tiny china bowls of butter and marmalade. It wasn’t a room for loud noises.

The hotel room had details of Duntrune Castle, which was fought over by various clans in the past. At one point, a piper from clan A remained after clan B had taken over, and when the way was clear, he played his pipes to alert clan A that they should attack. Clan B were somewhat miffed, so cut off his hands. He died (not unexpected). The ghost of the handless piper is said to haunt the grounds, or so the legend goes. Potentially not true. However, when recent owners were renovating the castle, the builders dug up a skeleton which had both hands cut off.

Now, I love a good story, so we had to visit. It’s privately owned, so we weren’t sure how near we could get, but we set off anyway. It was an adventure. Drove across moors, the only car on narrow roads. Wound our way to the castle, and the end of a private road. There are no footpaths in Scotland—instead they have a ‘right to roam’ law which we interpreted as anyone can walk wherever they want to. We parked on a verge, and walked down the road. No one stopped us. We walked right up to the gates of the castle. These gates were the inspiration for the Skyfall house in the James Bond film. The castle is still occupied, and we decided the ‘right to roam’ probably didn’t include walking actually into someone’s house. Was pretty cool though.

Beyond the castle is a garden, with an honesty box for donations to ActionAid and RNLI. We went inside, and they are very beautiful, a mix of wild and clever planting and pretty statues. Worth a visit (good Instagram-photo ops if you like that sort of thing!)

The hotel doesn’t have sandwiches, and even Hungry Husband felt that three cooked meals a day might be pushing it. There’s a little coffee shop (possibly linked to the hotel but in its own whitewashed old building). We wandered down and ordered filled rolls. My BLT was freshly cooked, with good fresh lettuce and tomato—but no mayo or butter. Perhaps you have to specify separately that you want those in Scotland. Or perhaps the coffee shop is linked to the hotel and they saw how much we ate for breakfast!

Thanks for reading. I will post further blogs (in a random order, because that is how I wrote them) so you can share our road trip through Scotland. Hope you enjoy them.

One thought on “Crinan”