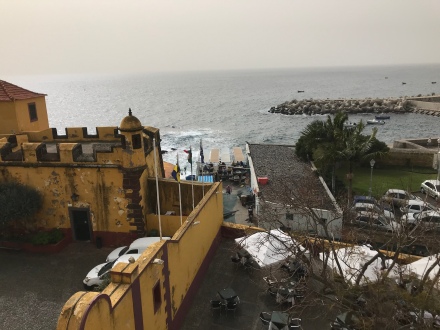 Exams were over, essays submitted, it was a chance to relax. Husband, who is forever lurking in the background trying to entice me away from home (because his work is mostly online) persuaded me that some winter sunshine would be good for me. I didn’t take much persuading. We went to Madeira.

Have you ever visited Madeira? The only thing I knew about it was that it named a rather nice plain cake. I now know that the cake was invented in the UK, to eat when drinking Madeira wine. I now also know how to make Madeira wine (had a tour of Blandy’s) and that it’s delicious—but more of that in later blogs.

Madeira is a small island (about the size of the Isle of Man) owned by Portugal but actually nearer to Morocco, a drop of volcanic rock in the Atlantic Sea. My brother told me to look out of the window as we approached the airport, and I wish I hadn’t because I saw the rather flimsy-looking runway perched on stilts. I also saw that the island is basically a series of mountains, caused by an ancient volcano and now covered in plants. The plants are fascinating.

We visited right at the end of January, which is sort of their rainy season, though we mostly had glorious sunshine. We rented an Airbnb, which was owned by an agency so fairly plain (individual owners tend to care more and decorate the house a bit) but it was very clean. The main thing was the position, which was brilliant. We were right at the end of the old town, next to an old fort (which someone decided would look nice if painted yellow—a mistake I feel). We overlooked cobbled streets and the sea, and the bright yellow fort.

Driving to the apartment was an adventure. We picked up a hire car ( a small one, thankfully) and set off along the main road. But then the Satnav took us into the city of Funchal and the streets grew smaller and very steep. As we approached the old town, the streets sort of disappeared and turned into narrow cobbled pathways. Very steep narrow cobbled pathways. With blind-bends at the junctions, and parked cars and pedestrians. Some streets had tables spilling out from cafes, for even more excitement. I was map-reading, and we made a few wrong turns, but I decided it was best to not mention it and just to keep talking in a calm voice. We arrived at the apartment, but there was nowhere to park, the narrowed cobbled street/footpath was busy, and a couple of policemen were strolling towards us. Not the time to practice my Portuguese.

Hard to know what to do, so I took charge (I felt Husband had enough on his plate with not killing anyone). I told him to unload me and the luggage and drive off and find somewhere to park, before the policemen reached us. Then he could walk back to help me find the key and lug our bags up to the flat. He left me with the cases and drove off.

I was standing in the entrance to a student residence. The sun shone down, I could hear the sea, the cases were unstable on the old cobblestones. I shuffled into a space next to a wall. Felt conspicuous. Tried to edge cases further from oncoming traffic, and blend into the background. It was quite hot, the street was busy, I had heavy bags, no key to the flat, and limited Portuguese. Felt rather vulnerable and hoped Husband would arrive quickly.

Husband was gone some time. He finally showed up, still driving the car, which was rather disappointing. He told me he had done several laps of complicated one-way system up and down steep, narrow roads, and there was nowhere to park. The flat provided free parking in the town carpark (which cost 40 euros) but the ticket was in the flat. Super.

We left the car sort of jammed in the entrance to the student building and hoped no one (especially the police) would notice. I used the code to get the key, ran up to the flat, grabbed everything that might possibly be linked to parking instructions, and ran back. Husband took the wadge of papers and drove off again. I stood next to heavy bags, feeling things hadn’t really improved.

Eventually Husband returned without the car. Things were getting better. He lugged the bags up to the flat. The view from the balcony made it all worth the effort. I will tell you more in my next blog. Madeira is lovely. But hire a small car.

Thanks for reading. Have a good week, and take care.
Love, Anne x

One thought on “Madeira in the Winter”