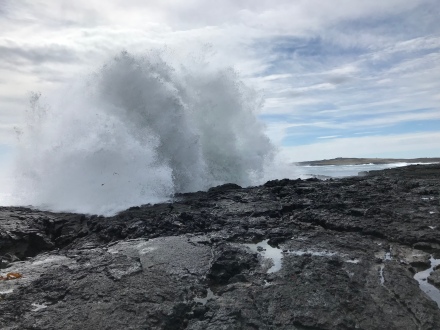 I prepared for our trip by watching Icelandic films, hoping to learn the odd phrase and perhaps see a little of the culture. This was a mistake, as I mostly watched crime films. I therefore stepped off the flight, entered the arrivals hall and was confronted by a line of serial killers holding name placards. Luckily we had rented a car, so avoided all the psychopaths and edged our way to the Avis desk. Avis had queues of people, very little space, and lots of signs about wind (the weather version). Wind is a thing in Iceland.

Known as the land of ice and fire, it should also be called the land of blue lupins. They were everywhere, lining the roads, growing on ancient mounds of lava, covering every hill and plain. Iceland in June is blue. Blue and grey. People told me that Iceland is beautiful, and it’s true that many parts were, but there’s an awful lot of grey. As we drove from the airport the landscape reminded me mostly of the groundwork when a new motorway is being built —mounds of grey rubble. Volcanoes are not tidy, and Iceland was produced by a string of eruptions. I guess there’s no point in clearing up the lava flow, so it sits there, pretending to be builder’s rubble, until the lupins move in to cover it in blue.

We rented an Airbnb in Reykjavik. This turned out to be wonderful, a converted printing works that consisted of one huge room filled with plants and nicknacks, with separate bedrooms and bathroom. It was used in the Netflix series Sense8, though most of the furniture was different.

Reykjavik is more town than city, with mostly wooden houses covered in colourful corrugated iron. It has clean streets, happy people in weird clothes (though to be honest, I think the clothes of most people younger than me are weird) and high prices. Iceland is expensive. The city also has a harbour, and a huge church (which looks like a cathedral) high on a hill, seen above the city.

We were told that in June, it would only be dark for a few hours each night, between midnight and 2 am. This was a lie. I got up in the night to check, and it was never dark. Slightly gloomy perhaps, like a grey day at home, but never dark. I took a photo for evidence…

The June weather was cold, but not freezing. I needed a warm sweater and a coat, but not a ski jacket (which is lucky, as I don’t own one!) A woolly hat is fairly essential, not so much for warmth but more for hair control. Husband declined repeated offers to borrow a hat, and the hair style wasn’t good. As I said, wind is a thing in Iceland.

We saw some amazing stuff while we were there, but I’ll tell you about our trips in another blog. Is Iceland beautiful? Beauty is very subjective, and I never really saw past the grey rocks, the black mountains, and the lack of trees. Especially the trees. Most other people have a different view, so I’ll leave you with some pictures and you can decide for yourself.

I try to learn a little more Hebrew whenever I run (it helps take my mind off the pain!) In Iceland I began to learn 2 Chronicles 7: 14. You could try to learn it too?
*Note to Mother: Please learn the English version and we can make another Facebook video!
I will add it to the end of each Iceland blog:

If my people, who are called by my name, humble themselves, and pray and seek my face and turn from their wicked ways,
then I will hear from heaven and will forgive their sin and heal their land.

3 thoughts on “‘Iceland is Beautiful,’ they said…”