Do you know much about homeopathic medicine? I didn’t. In fact, I mistakenly thought it was the same as ‘herbal remedies.’ It’s not. I encountered it recently when Husband returned from the vet after taking old dog for her vaccinations. Kia is a German Shepherd Dog, and GSDs usually live for 13 years, but often die after reaching 10 years due to their deep chests often causing twisted stomachs. You might remember that Kia also suffered from this a few years ago, but we managed to get her to a vet in time, and although her recovery seemed to last forever, she survived. Kia is currently 15 years old.

The vet congratulated Husband on Kia’s age, and asked how she was doing. She is doing well. Her age means she mainly sleeps, and I have bought a big comfy bed that sits in the middle of the kitchen floor, so Kia can lie all day long and watch everything that happens. A few times each day I take her outside, we walk up to check the poultry, she greets the cats, and sniffs for foxes, then she returns to her bed. Her world has shrunk, but while she can see me, she seems content. Mostly she sleeps.

However, age in dogs brings problems. The main problem is to do with the messages from the brain, which I think are carried by a substance called ‘myelin’ and with age, the spinal column becomes crusty and this blocks the messages. (This is a very rough layman’s explanation, so don’t quote me!) The first sign is lack of feeling in the hind legs, then ability to control poop, and finally wee incontinence. The vet asked where we were up to. Kia cannot feel much in her back legs, and is a bit wobbly when she gets up, and I have to ensure she is exercised at appropriate times so she toilets outside, as otherwise we have accidents. But we’re doing okay so far.

The vet then mentioned that he also studied homeopathic medicine, and he had something which a previous client had given to her dog, and she had raved about how much better her dog was in just a week. Husband bought some. 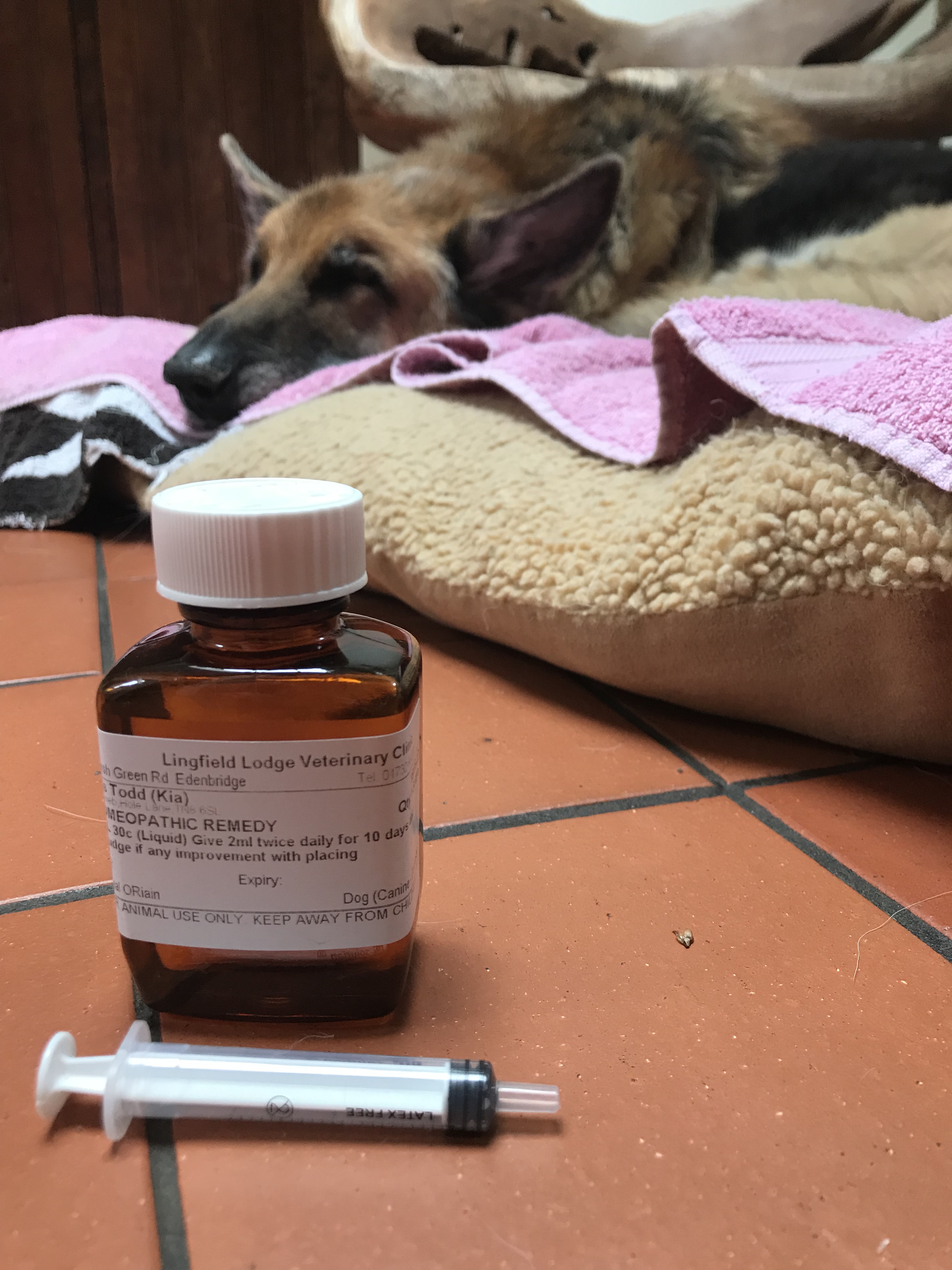 I was presented with the dark bottle, and told to give it to Kia twice a day. I was also told it shouldn’t be placed near the microwave or mobile phone, as they can alter it. This made me suspicious, so I asked a few people and did some online research. I learnt the following:

*Herbal remedies are medicines made from herbs. They need to be regulated, because ‘essence of herb’ might be dangerous, and they contain substances which might be helpful, but might also interfere with medicine from the doctor, so some care should be taken. I suspect, as medicines from the doctor are simply chemicals, and essences from herbs are simply chemicals, that some of them are effective.

*Homeopathic remedies are altogether different. They date back to the 1700’s, and some people credit Socrates (much earlier, obviously) with first exploring the idea. The principle is that if the body has an ailment, you find a plant that causes that ailment and then administer a hugely diluted does. This enables the body to recognise what’s wrong, and thus fight the problem. A little like vaccines work, but they help the body fight a germ, homeopathic remedies treat an illness. The remedy given to Kia was based on hemlock.

The problem with homeopathic remedies, as far as I can tell, is that they are diluted, shaken, diluted again, over and over, which means that there is no discernable trace of anything left in the water. Some people believe the ‘shape of the water’ has changed; I find this difficult to believe. People do report being cured, but this is confused by the placebo effect, because when someone believes they are being cured, the brain is hugely powerful and is able to change physical responses–even though the problem might still be there. So, not cured.

My research led me to believe (and I might be wrong, so form your own view) that the homeopathic remedy was basically ‘magic water.’ It was not going to alter anything physical in Kia. However, it also wouldn’t hurt her (it was just water). I therefore agreed to administer it, as long as she was happy to take it, and we could see what happened. I expected no change, Husband was hopeful.

I kept a mental note of whether (1) Kia still dragged her back legs after walking for 5 minutes, whether (2) we still had unexpected poop in the kitchen occasionally, whether (3) she staggered when she first stood up. Husband felt that her legs were straighter, and she was walking better. I noticed no change whatsoever in the above three things. After a week, I stopped administering it.

I have not, however, thrown away the dark bottle. Afterall, sometimes in life it’s nice to know you have a bottle of magic water…even when you know it doesn’t work.

Hope you have a great week. Thanks for reading.
Take care.
Love, Anne x