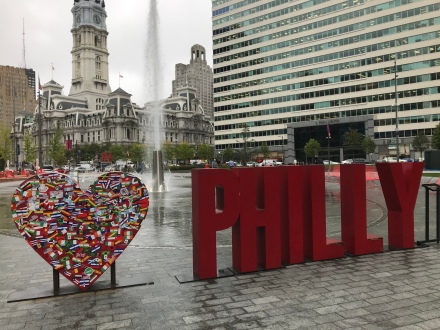 I am still waking at 3:30am, which is very annoying. Stayed in bed until I thought I could wake Husband without getting feed-back. We have decided to run every morning, and as it’s a good way to see ‘real life’ we run along the streets near our motels rather than use their fitness rooms. From the Fairfield Inn where we’re staying, we only have to cross one major road before we reach a residential area, and we run up a hill to Veteran’s park, round the park, and back to the hotel. This morning was cold, and less humid than previously, so it was easier to run. (I use the term ‘run’ loosely.)

At breakfast, there was a waffle machine. Several hotels have these. You squirt batter from a vat into a cup, then pour it into the waffle machine. When you close the lid, it starts a timer, which pings when the waffles are cooked. Very easy. Hot waffles, with syrup and a selection of fresh fruit. It’s all very nice, but because it’s served on plastic plates, with plastic cutlery, and the coffee cups are disposable, it doesn’t feel nice. Which is a shame. I have discovered that drinking coffee from a china mug is weirdly important to me.

We catch the hotel shuttle bus to a nearby station, and spend some time trying to understand the automatic ticket machine (which seems to be the only option for tickets to the city). I use the washroom while Husband tackles the machine. There is a large woman in there, washing her private parts (the washroom, not the machine). I pretend I haven’t noticed, and hurry out again.

We caught the train to the city, and looked at the US residential areas that we swooshed past—lots of small, but detached, housing made of wood, all laid out on straight roads. A map of an American town looks like a chess board. 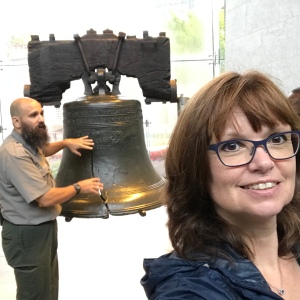 I had planned a walk around Philadelphia that covered a few of the things we wanted to see: Liberty Bell, Love Park, Benjamin Franklin Parkway, Rodin Museum, and the ‘Rocky Steps’ at the Philadelphia Museum of Art. The weather was cold and damp and started to rain.

In brief: The Liberty Bell is big, has a crack in it, and there is a friendly guard standing next to it who will give you a brief potted history about the bell, if you ask.

Love Park is a photo-spot, and not much else, especially in the rain. 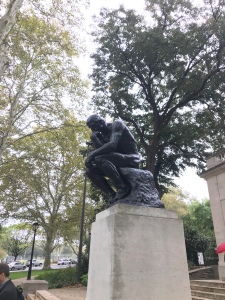 Benjamin Franklin Parkway is probably nice in the sunshine. There is a man walking along it shouting obscenities. There are also helpful maps and tourist guides on posts. When we stopped to read one, a passing woman stopped and offered to help, and said that her husband had designed them all. This is possibly true. Or maybe she needs similar help to the obscenities man.

The Rodin Museum has a wonderful garden with some Rodin sculptures in, which you can visit for free. You can pay (an in-theory ‘voluntary’ donation) to go inside, and see some rather boring sculptures by Rodin and other people. I recommend you stay outside. Unless it’s raining.

The ‘Rocky Steps’ are from the ‘Rocky’ film, which I have never seen, but Husband was very excited by. He did not, however, run up them. 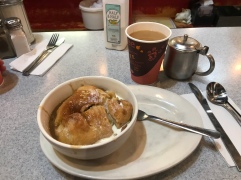 We then went to Reading Terminal Market. This was good, because it was dry. It also had delicious smells from all the food stalls. We stopped at The Dutch Eating Place. We sat on high stools at a bar, and ordered coffee and apple dumpling. It was perfect. The coffee was hot and strong, the dumpling was simply delicious. This is probably one of the highlights of my whole trip. We left feeling warm and full and contented.

The weather was still awful, and I decided that actually, I am not very keen on cities. We ordered a cab through Uber. We have never used Uber before, so that was very exciting! When the driver arrived, he was Chinese, and we couldn’t get him to understand our English accents to ask whether he was paid automatically, or whether we paid him directly. After a few attempts, I asked if he spoke Mandarin, and then asked him in Mandarin. As ever, wherever you are in the world, Mandarin is the best language to understand! 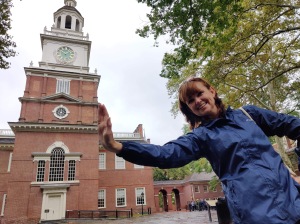 If you like cities, then Philadelphia has lots to offer. There are lots of historical monuments and a plethora of art galleries. But in the rain, it’s just another city—so head for the Dutch Eating Place and treat yourself to something delicious!

I hope you have some excellent food today. Thank you for reading. 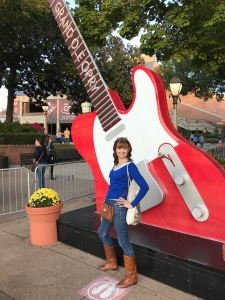