Monday: Drove from Sorrento to Puglia.
Mammoth journey, took forever. Loads of traffic – most of it on the wrong side of the road whilst over taking at least one car and two scooters on a blind bend. Also had a detour due to a forest fire.

Arrived in Torre Canne about 4:30.
Spent a long time looking for Hotel del Levante. (We booked this holiday through Citalia but I think they no longer use this hotel as it isn’t on their website. I don’t know why – it wasn’t the prettiest hotel we have stayed at but we liked it.)
We unpacked and looked around. It all felt very foreign after the Sorrento Hotel Bristol and was much less luxurious. However, it was clean and the pool and beach were excellent.

Dinner was okay.
Slept well even though it was quite noisy.
The rest of the family stayed up.
There was a shared computer in the foyer which James had a dispute over with another guest (who felt that he was more important so told James to let him use it. Man was now on Mike and Mark’s hit list.)

Tuesday: Got up and walked along the beach to the lighthouse. There were lots of men setting up stalls on the beach selling beachwear and toys. Hotels were setting up their chairs on the beach, ready for guests.
Breakfast.
Big discussion about that evening. The hotel was holding a Gala Night which involved paying an extra €15 per person to ‘cover drinks’ (we had already paid for dinner in our ‘half board’ rate). Which was quite a lot for six of us and we had to pay even for those who wouldn’t drink.

Coffee at breakfast was nasty, but the hot chocolate was good.
There was a buffet breakfast with a good range of fruit, cakes, cheese, eggs etc.
Some people took food from breakfast to eat later (which I am not sure was ethical.)

Swam.
We were invited to play volleyball. We lost, but not too embarrassingly.
Went in sea until David told me there might be jellyfish. (We did not see any jellyfish the entire holiday, so he may have been lying because he was bored with me swimming.)

Pizza lunch from pizzeria next door.

It was brilliant so I am very pleased that we did!
They had set up a fountain in the pool, there were lights in the trees, ice sculptures, flowers and candles.
All very beautiful.
We sat at tables around the pool, listening to the sea.
There was a huge buffet, which we thought was the main meal but then they served dinner!
Lots of food, lots of wine. There was a band with a singer, then fireworks, then dancing.
They brought out a massive chinese lantern which they lit using a blow torch and set off to float above the sea (we were a little nervous at this point in case it set fire to the guests, but luckily no one got burned – would have rather spoiled event…)
Lots of people came onto the beach to watch the dancing – I am assuming they walked up from the town. Mark did one of his frenetic dances and they all cheered (proud mummy moment.)
Was great fun.

Wednesday: Very sleepy.
Late breakfast at 9.
I went back to bed, family went on beach.

Went into town just as everywhere was shutting. David bought a ball. Mike didn’t buy a tee-shirt. Becky didn’t buy a jumper (yes, a jumper. Why? It’s boiling hot!) Everyone hot and grumpy.
Drove back to hotel. David only went wrong once, family very restrained in their feedback.
Hotel man looked very depressed when we gave him another car to fit into his over crowded car park (maybe he drank too much last night too.)

Spent the afternoon in the sea and pool.
Boys took inflatable boat into sea. Didn’t float to Corfu (lucky, would have been inconvenient.)
Becky was presented with shells – was not especially keen on the crab claws or the bits that were still alive.
I swam with David for a while and did not get stung or eaten.
Read and had an ice cream and an espresso next to the pool. Felt very contented.

Dinner was slightly dysfunctional (the staff must have been tired from the previous night.)
The house next to the hotel had a party. Extremely loud music for much of the night. Not much sleep again.

Thursday: After breakfast went to Alberobello.

Saw lots of trullo.
These are little round white houses.
They were first built in the fourteenth century. The Count, who owned the land, told all his workers to build them because they could be quickly dismantled when the land was inspected and he could avoid paying taxes.
They were pretty, but it was too hot for them to be interesting for long.
I bought a cushion cover for my collection (more expensive than ones bought in Asia or the rest of Europe or US!)
Mike didn’t buy a tee-shirt.
Becky didn’t buy a bikkini (but at least she was now looking at weather appropriate clothing.)

Friday: Breakfast at 9.
Every morning, David woke the boys by phoning their room with an annoying poem or song. Every morning James answered and put down the phone. It was a little ritual. Do hope he never phoned the wrong room.
Did nothing. Nice.
Last night, the boys watched a horror film where the main spectre was called Natasha. Today, when they were swimming, a small girl joined them. They asked her name. She said ,“Natasha.” They then both roared, “Na-ta-sha” back at her. Luckily she seemed completely unalarmed by this and continued to play pool volleyball with them. Must have had older brothers.

Saturday: I walked along the beach before breakfast.

I really liked that beach.
It was packed with whole families, mostly Italian, from grannies to babies.
Sellers walked up and down with swimwear and beach toys.

Everyone was relaxed and enjoying themselves.

After breakfast we drove to a zoo but it looked a bit naff and over priced. Drove on to some caves.
I wandered around gift shops and had a coffee in the shade and read.
The family went into the caves and said they were excellent.
Had lunch there (not overly efficient service.)
Drove back to hotel.
Got petrol – always an adventure in small town Europe if you don’t speak the language. This time we had to pay in advance. Worked it out eventually.

Sunday: Day by sea and pool.
Boys played volleyball against various teams, including ‘marathon girl’ (who was a very pretty teenager who was also rather good at volleyball!)
The hotel staff wander around, inviting people to join in various games. Is ideal for a family.
I stopped worrying about people ‘stealing’ from breakfast. Everyone seemed to do it and were very open about it. One old lady even took foil with her to cover her plateful!
Enjoyed the sea. Had big waves.
Nice dinner (they were sometimes a bit random.)
Chatted, then James took his holiday photos. All of them, for the entire holiday. In his room. Not going to be an artist I feel.

Monday: We packed.
We asked to keep one room until we left in the afternoon. Everyone moved their stuff in.
We swam and played on the beach. Made sand animals on the beach and lots of people stopped to look at them. Clearly the Italian word for “Dragon” is “Crocodee”
Showered, pizza, played Catan.
Flew home. Good holiday. 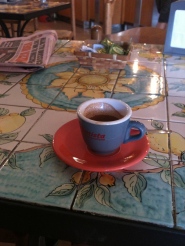