How was your week? I am feeling hassled! It’s mainly to do with not having enough time at the moment. I have started writing about Joanna (my psychopath) and I’m loving it. I spend all my time thinking about her, imagining what she is like and I am desperate to write her story. But real life keeps getting in the way. I notice dirt I ought to clean up, husband wants dinners, the animals need looking after, I still have all my commitments at church, I have friends to keep in touch with. It all feels like too much sometimes.

I know it’s better than having an empty life – sometimes I’ve had those phases too, when I have too much time, life is lonely and boring – but right now it’s too full. Then I wrote a whole chapter of my book and realised afterwards that it was wrong. I had my psychopath stalking victims on Facebook but actually she was active before 2004, so social media wouldn’t have been available for her. Very annoying. I had to think back to those days when we didn’t have computers and we actually read newspapers for our news and had absolutely no idea what aunty Flossy was up to.

I do find that I get stressed very easily now – do you? I have actually started having proper panic attacks over the tiniest thing. I thought for a while that it was due to my brain surgery, they cut through the bit that controls stress in the body, so I was blaming all my worries on that.

However, when I mentioned it to my hairdresser (no, do NOT laugh at me – hairdressers see more of real life than most other people, plus when you are stuck in a chair for ages, it’s natural to chat, you get to know each other) she assured me that many women of my age start to feel nervous about things. I have been asking around and I am amazed at just how many people do get anxious about situations that they know are ‘safe’. Things like having coffee with a friend or going somewhere that I go regularly, all now cause these anxiety feelings. Really, I would much rather just stay home with my animals and never go anywhere. But that would be odd. Even for us ‘women of a funny age’ I feel there should be limits.

It made me wonder though if it is just a natural part of aging. If worrying about things that never bothered us before is so that we do start to cut back, we become less adventurous at a time of life when perhaps we should be thinking twice before we bungee jump or trek through a rainforest.

At our church group this week we were asked to consider how we could build bridges with people, to be involved at a deeper level with people. I told them that actually I wanted to blow up a few bridges. I don’t think it was quite the response they were hoping for.

It’s true though isn’t it, sometimes we can feel stretched too much, as if we have become like that stretchy man in The Incredibles. A bit too thin.

They have also changed the name of the church group. It is now called a ‘Life Group’. Not sure what I think about that. It sounds like the religious equivalent of ‘AA’, some sort of support group. Or perhaps that’s the idea, maybe it is a kind of support group, meeting friends to share how we’re getting on with trying to live good lives. Not very well in some cases (but you’re only allowed to say that about yourself.)

My sister’s letters can be found at : http://ruthdalyauthor.blogspot.co.uk 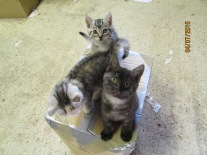