We caught a ferry to Chuang Chau from Pier 5 on Hong Kong Island. We had a choice—a slow ferry which takes an hour, or a fast ferry which takes 40 minutes. We went with the slow boat, and sat on hard seats next to an open window, enjoying the view as we rattled our way through the water (it’s not a new boat). The seats were comfy, and clean enough, though it’s important to choose your neighbours carefully, as an hour in front of a screaming toddler or a loud old man or a group of noisy teenagers, is a very long hour. The ferry has several signs – signs telling you not to smoke, and to remain seated, and that gambling is forbidden. I have seen the last sign several times since we’ve been in Hong Kong, gambling is clearly a thing here.

Hong Kong is a busy port, and we passed huge container ships, and tugs, and fishing boats of all sizes. It was a cloudy day, and many of the islands were hidden in the mist. 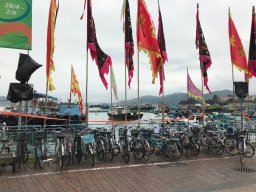 Cheung Chau greeted us with colour and bustle and noise, there was something exciting in the air as we approached.

May is the bun festival, and as we left the pier we could see stall after stall selling buns, and the quay was lined with bright flags, and everyone was in party mood. The buns are white, and round, and stamped with various characters (Chinese script)—they said things like ‘wealth’ or ‘peace’ or ‘good luck’. If you looked behind the stalls, you could watch people making the buns, tray after tray being put into ovens, or stamped with the character, or put into boxes ready to be sold. People were buying them to take home, or to eat straight away, and there were several flavours: sesame, or red bean paste, or lotus bean. People walked along the street eating them, browsing the stalls and shops crowded with trinkets and gifts. There were also bun-shaped mementoes, we bought a bun-shaped cushion and a fridge magnet. 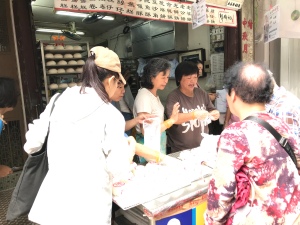 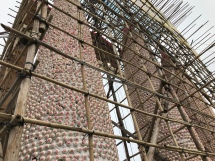 Now, you might be wondering, why buns? I’m not entirely sure, but the festival is related to one of the island’s gods, Pak Tai. In the early 1800’s, there was a plague, and the people believed that Pak Tai saved the island from this plague. In return, they offered mountains of buns to the resident ghosts. (To be honest, I’m not sure why they offered buns—it’s a fishing island, so offering fish would have made more sense—perhaps they thought the ghosts liked buns. I’m also not sure why they offered them to the ghosts, and not to Pak Tai. But anyway, that’s the only explanation that I found.) Every year, the island holds a bun festival to remember that they were saved from the plague. They make huge towers of buns, and the children climb them. Except, fairly recently, there have been some horrid accidents, so now some health and safety regs have been put in place, so the bun towers are built on a solid structure, and the climbers wear harnesses.

We wandered up to the Pak Tai temple. There were bun towers being constructed. There was also a stage, with a Chinese opera, which we watched for a few minutes. If I’m honest, a few minutes of Chinese opera is long enough for me—I don’t really enjoy it. There were also washrooms. (Note, when travelling in China, the Buddhist temples always have the nicest, cleanest, toilets…Christians should take note of this and try to keep up.)

We bought ice-creams, and wandered back to the quay to watch the fishing boats. Then we crossed the island again, and looked at the beach. There’s a net, to stop the sharks eating the swimmers. (When I was in Hong Kong a few years ago, with a friend who lives here, I asked her if shark attacks were common. “Oh no,” she said, “Only about 3 swimmers a year are eaten.” I think the net is a good idea.) 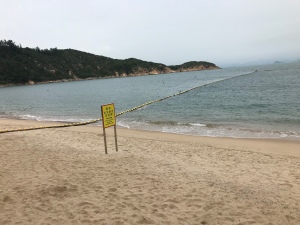 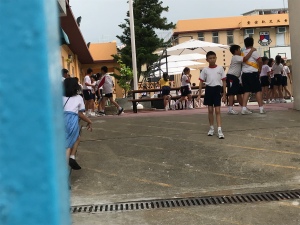 We passed a school, with cute children in uniform running to meet their friends. Cheung Chau is a very normal place, you can see lots of ‘real life’ as well as all the touristy bits.

It was a lovely day, and there were plenty of ferries, so when we’d seen enough we went back to Kowloon (taking care not to gamble on the ferry).

Afterwards, I worried about the cushion we had bought – is it ‘wrong’ to have things from other religions in the house? Is it rude to God? I don’t think I would want a Buddha, or a Hindu statue in my home, but did a bun-shaped cushion matter? If I believe that God is the only God (which I do) then I should be careful not to ‘hedge my bets’ by also having lucky talisman. I decided that it was fine. For me, it represents a happy day out, and an interesting tourist sight, it has no ‘religious’ or ‘lucky’ connotations for me. Perhaps it worries me because it’s unfamiliar. There are symbols from other religions that are familiar, and I never worry about those—for example, every year I have a Christmas tree in my house, yet those came from the sun god Balder (for me, they are simply part of the Christmas tradition). I also will give and receive Easter eggs, but I never think they will increase fertility, nor do I worry that they originated from Eastex, the pagan goddess. My bun cushion has the Chinese character for ‘peace’ on it, which is not a bad thing to have written on a cushion, and it is a cushion, nothing else.

Thanks for reading, remember not to gamble on your way to work. Take care.

If you enjoyed this, why not read my travel book? It makes a nice gift too… (you can read it for free if you have a Kindle.)