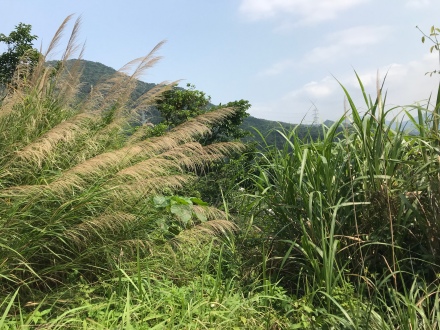 Here’s another blog from Hong Kong. If you enjoy it, why not read The Sarcastic Mother’s Holiday Diary? It will make you laugh, and you can read it for free if you have a Kindle…

From our hotel room, we can see across the city to the mountains. I wanted to visit those mountains, simply to see what was there, so we hired a car (not a hotel car, as that was about £100 an hour, but a car recommended by the concierge). The driver was very chatty, which was fun, as sometimes you learn more from the driver than from what you see. As we drove from the city, he said that lots of the apartments in Hong Kong were being bought as an investment by businessmen in mainland China. They don’t live there, or rent them out, they simply own them as an investment. He said that at night, whole floors of luxury apartment blocks are dark and unoccupied.

We approached the mountains, which are vast areas of wild, covered in trees. We asked if there are still wild animals—mountain lions and deer—which roam the forests. The driver laughed and informed us that Chinese people, “Eat anything with 4 legs except the table!” No animals left then… The mountains are wildlife parks, and people from the city hike in them. Previously, there had been some areas of farming, but all food is now imported.

We drove to Lok Ma Chau Garden. This is a small, peaceful garden full of butterflies (and a weird man who was doing something strange). It has wonderful views, across a marsh, to the tower-blocks in China. It’s very close to the border, and the main road actually crosses the border, so we had to drive a clever route (as we don’t have Chinese visas). 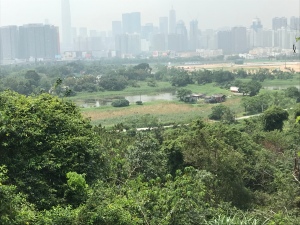 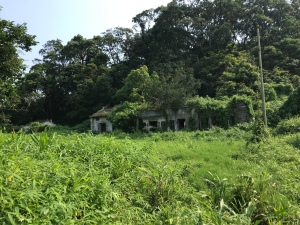 We then tried to visit Sha Lo Tung, which is described in our guidebook as a beautiful abandoned village in the mountains. I think our guidebook is out of date. The roads there have pretty much disappeared, and we ended up driving along narrow tracks, up the side of the mountain, with huge potholes, and sheer drops on one side. I worried the car would be damaged, or that we’d get stuck. It was more exciting than we’d planned. Eventually, we found the village, which was more of a ghost town than described. It was wonderfully isolated, and you could see the remains of paddy fields, and tumbled down buildings, and overgrown shrubs. There were lots of hikers (the roads were better designed for hikers than cars) and a whole array of emergency services arrived because someone had become dehydrated and was unable to walk back. (At least, that’s what they told us—but we’re foreign, and they’re Chinese—they wouldn’t have told us if there had been an accident or crime; I admit to being sceptical that a dehydrated hiker would merit a fire-engine, an ambulance, and 2 police cars, but perhaps I have a suspicious mind.)

Our driver told us that people in Hong Kong love Donald Trump (he might not have been speaking for everyone, of course). He explained that: “My enemy’s enemy is my friend.” The politics of Hong Kong are complicated—brace yourself for a lesson:

The British were ‘given’ Hong Kong Island during the Opium Wars (see previous blog—the British behaved appallingly). Under British rule, it became a thriving trading centre, and the British asked for extra land to support the infrastructure, and so were given Kowloon (up to Boundary Road). As the city developed, so more resources were needed, so China leased the New Territories to the British for 99 years, ending in 1997. As the end of the lease grew near, the British tried to renegotiate, but the Chinese government refused to discuss (according to our driver). The islands of Hong Kong, and Kowloon, were unable to function without the resources on the New Territories—for example, the dam that provided all the electricity was there. Therefore, when 1997 arrived, China took control of both the New Territories and Hong Kong, promising that nothing would change for a set period of time (50 years). They operate a ‘one country, two systems’ policy, which will end in 2047. The people who live in Hong Kong are very bitter about this (at least, our driver was, despite being Chinese ethnicity, he does not want to be part of mainland China). At the moment, there is little discernible difference in the present Hong Kong with the pre-1997 one, but people are worried that this will change, and free trade and free movement and free speech will start to be restricted.

Politics aside, Hong Kong is a wonderful place to visit. We arrived home to hatching eggs—I’ll tell you about that next week.

Look in Amazon for The Sarcastic Mother’s Holiday Diary. It makes a great gift.

4 thoughts on “Hong Kong New Territories (and a little politics)”