One of my favourite places in the world is Exmoor. I love the wildness, the untamed views, the weather-deformed plants, the wildlife struggling to exist in an austere landscape. I love that people have had so little impact, and that wild ponies wander over areas of toughened grass and wiry heather. So, when we were in Devon, and Husband suggested a walk on the moors rather than another beach walk, I was very keen.

I dressed in my new bobble hat and gloves and thick coat—because whatever the weather when you leave the house, the moors can catch you out with harsh winds that push through layers of clothes and freeze your bones. We drove to one of the roads that meanders through the moor, crossed the cattle grid, and looked for somewhere to park. There are several areas along the road where cars can pull off and stop.  There were various cars parked on areas of rock, and we were in a 4-wheel drive, so it was easy. I’m not sure how the Fiesta would manage. (But then, our Fiesta has moss growing on it, so I’m never sure it will even make it to the shops and back!)

The moor is covered with tracks, and we followed one towards a triangulation point (a small tower of concrete used in mapping). The earth was black, sodden from the rain, rivulets of water running between the granite stones. The wind snatched at our hats, tangling hair and tugging at our clothes, the heather whispered beside us as we walked up the hill. Kia had to be kept on the extending lead, because I didn’t trust her not to chase sheep or deer, but actually we didn’t see any animals at all, only their tracks. 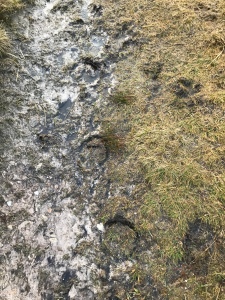 We saw lots of footprints, and Exmoor is home to sheep, wild ponies, and deer–as well as possibly a panther.
We didn’t see any of them while we were walking. 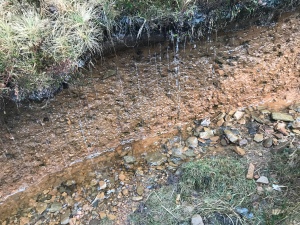 The water was seeping through the peat soil, meeting a layer of granite and trickling down in a mini waterfall. Kia used it as a drinking fountain!

I was also looking out for signs of the Exmoor Beast—a probably mystical animal that has been sighted for decades on Exmoor. Apparently at one time, after a farmer had a flock of his sheep killed, the government based the Marine Commandoes on Exmoor, in hides, to try to confirm whether the animal existed. They didn’t see anything. Most people think that probably a panther was released there in the 1970’s, when the law changed so it was illegal to keep them as pets—but who knows? Unless it eats some people, it’s unlikely to be discovered.

We didn’t have a compass, and Husband worried that we might get lost if we wandered too far from the sight of the triangulation post. I thought we’d be fine, and marched off into the wilderness. It was surprisingly hard to find the same route back. If the mist had come down, I think you could wander for hours.

As we drove away from the moor, we saw a herd of deer, the males standing tall against the horizon—beautiful.

There is something about Exmoor that reminds us how small we are, how vulnerable we are when immersed in a wilderness, whether there are panthers or not, which is a good thing to be reminded of occasionally. A long walk in the wind also makes you feel a tea with scones and cream is completely justified—which is the part of Devon that should be enshrined in law.

There are triangulation posts scattered over Exmoor, which make helpful markers for not getting lost. Other places have standing stones: large slabs of granite standing up like soldiers.

I hope you have a wonderfully wild time this week. Take care.
Love, Anne x

2 thoughts on “The Beast of Exmoor”