Well, my Wednesday was very annoying. This was partly my fault, as I managed to get extremely stressed over something which I know, from past experience, is not a thing worth being stressed over. But I’m out of practice.

As my regular readers will know, a few years ago I had a small brain tumour removed, via craniotomy, and hence ceased a 5-year migraine and a lot of hassle, and a whole new lot of weird things needed to be coped with, but on the whole, I was much better. However, the nasty little tumour they removed (I think all brain tumours are nasty, but perhaps I’m biased) has a tendency to regrow. It’s not malignant (cancer) and so I suppose if you have to have a brain tumour, my type was one of the better ones. But it was still nasty.

Now, when they operated, they told me that due to nasty tumour’s tendency to regrow, I would have occasional MRIs for the rest of my life. These have become further and further apart, and in November they sent through an appointment—for Wednesday. I have been in many MRI machines, I know the drill, I know it is mainly boring and very loud and slightly uncomfortable because you can’t move and you’re lying on a hard surface. But they are nothing to worry about, there is no need for stress. I know all this. However, Wednesday morning I was tense and snappy and couldn’t concentrate and the whole morning was spent waiting to leave for London.

I left far too early, telling myself that trains might be cancelled and I did not want to be late, and I could have a cup of coffee at Victoria. Then, as we sat on the train, watching the rain-saturated fields whiz by, Husband’s phone rang. For some reason, the hospital only seems to have Husband’s number (I have given them mine many times, so perhaps they don’t really trust me). Anyway, it was the imaging centre, saying that my appointment had been cancelled.

We got off the train at Croydon, and I called them back. The administrator told me that yes, she was very sorry, but the MRI machine had broken, and the engineer needed to get a new part, and therefore my appointment was cancelled.

I tried to change her mind. I asked if they had more than one MRI machine (they do) and why I couldn’t simply be scanned in the other one. I told her that we had already set off, and that the scan was to discover if my brain tumour had regrown (which I don’t think is the case, but we can’t be sure). She checked her lists, and tried to fit me in, but eventually told me that sorry, I need to be in the machine for 45 minutes, and that was just too long to fit into an already full schedule. She made another appointment, for Friday. Which was not so very long to wait, but I was still annoyed. I really hope I was also polite—it wasn’t her fault, and she was being very kind.

We walked across to the other platform, and caught a train home. As I travelled home, I wondered how they had chosen which patients to phone, because I’m pretty sure we would not have been allocated to a specific machine. I then realised, that actually, some of those appointments would be emergencies. There would be people with hydrocephalus, or in agony, and for them to be scanned ahead of me was completely right. My appointment, whilst important, is not urgent. I need to be checked, but I won’t die while I’m waiting. If I learnt anything about being ill, it is that medical things rarely go smoothly, and you need to be a little chilled about it. I tried to forget about it, and got on with my day.

Friday arrived and I repeated the process. I travelled up to Victoria again (managed to get further than Croydon this time) and Husband kindly met me after work. We wound our way through the busy London streets, because I prefer to walk than take the underground. Walking calms me, and helps me to focus on not getting lost rather than on the unpleasantness ahead. Husband wondered if they had fixed the machine properly, and said he hoped it wouldn’t explode while I was in it. I didn’t find this a very helpful comment.

We arrived at the imaging centre, and I filled out a questionnaire, and assured them that I had been scanned several times since my surgery, therefore whatever they rebuilt me with must be safe in their machine.

Then it was time, they gave me ear-plugs and headphones, I lay on the hard bench, they secured my head so I couldn’t move, and lowered something like a visor over my face. I was given a plastic thing to press if I needed their attention, and offered a blanket. (I always accept the blanket, those machines get cold!) I shut my eyes, so I could pretend I was in a wide open field, and I felt the bench being slid into the machine. The voice of the operator boomed into my ears, asking if I was alright, telling me she was ready to start. I like it when they speak to me –some operators are better at that than others. Then the machine started, with judders and thumps and what sounded like metal grinding against metal, and at one point the whole machine trembled and shook, and I wondered if the world outside had exploded, and I was the only person left alive. I kept my eyes shut, and tried to not move (does swallowing count as moving? I’m never sure if I’m allowed to swallow in there!) I tried to pray, because there’s not much else to do when trapped in a machine, and it seemed a good use of time, to pray for friends and family and the possibility that the world might be about to implode.

Eventually, it was finished. The very nice operator sent someone to slide me out from the machine, and I returned the ear protection, and folded the blanket, and felt a little dizzy from lying still for so long. They couldn’t tell me anything, I have to wait for my appointment with the surgeon in 3 months for that. But I didn’t really care. It was done ( and I know from experience, that if there had been anything urgent they would have delayed me until a medic had checked the scan).

We left. Jay met us on his way home from work, and we ate at The Natural Kitchen in Baker Street, and the evening was rather lovely.

I hope your nasty things this week have lovely endings too. Thank you for reading.
Take care.
Love, Anne x 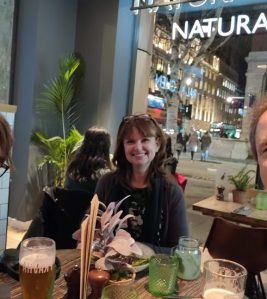 You can read more about my brain tumour experience in my little book: How to Have a Brain Tumour by Anne E Thompson

Available from Amazon (free if you have Kindle Select).

3 thoughts on “MRI — The Machine Did Not Explode”