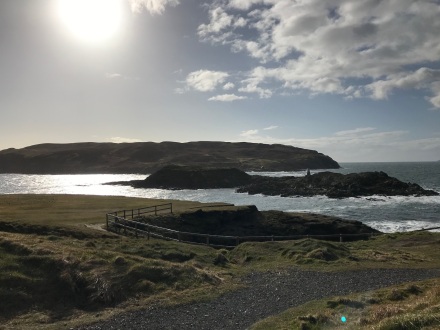 We went to an island that had the hills and valleys of the Yorkshire Dales, with the dramatic coast of Cornwall, and the slightly ugly but real houses of Wales. It was perfect, and very unspoilt, so to be honest I don’t want to tell you where we were. But that feels a little mean, so I will tell you the name in a later blog—unless you can guess already? I will give you some clues.

We left home last Monday, to catch a flight from Gatwick. I worried about Coronavirus, and wrapped my scarf around my head and face, so I resembled a sort of paisley Egyptian mummy. It was very hot! We jostled shoulders with hundreds of people, and I wondered if hand sanitiser—which kills bacteria—was any protection at all against a virus.
We flew to the island, and most other people hadn’t checked in any luggage, so collecting our bags was super-fast. The airport was tiny, and we went straight to the Avis desk, where a friendly lady gave us the keys to our car and told us not to put in too much petrol because the island was too small to need much. She had a sort of Liverpudlian accent, which took me straight back to being 17, and visiting my sister when she studied at Liverpool Uni.

We drove to the Airbnb, which was right opposite the beach, then walked to the town. The main street had all the big-name shops: M&S, Topshop, Next, Clarks; surprisingly it also had customers, and it reminded me of twenty years ago, when High Streets weren’t full of boarded up windows and Poundland. I realised that probably the hassle of internet shopping/delivery when you live on an island, means that real shops, with real products, are how most people shop. It was rather nice.
We drove around the hills behind the main town. The roads were brilliant, and Husband enjoyed the drive and went slightly faster than I hoped. (A big clue here!) The island has no national speed limit, so although there are restrictions in the towns, an ‘end of speed limit’ sign means just that: there is no speed limit. We drove up a mountain, with ragged-looking sheep and patches of white snow gleaming, and views across the sea to the mainland. It was beautiful and wild and absolutely freezing cold.

The island has fairies (this was in the guide book, so it must be true). They are not the tiny flighty girl-fairies of picture books, with their long hair and floaty dresses and shiny wings. No, these fairies are about 4ft tall, with pointy hats, and they cause no end of trouble, especially if you don’t show them respect. They are referred to as ‘Themselves’ and have been known to steal babies and bring bad luck and all sorts of other mischief. I made a huge mistake in reading this section of the guide book to Husband, who then spent the next few days pointing out every person who could, possibly, be a fairy. To be honest, there are an unexpected high number of very short people on the island, most wearing bobble-hats, some sporting long beards (mainly the men). It made me giggle, which was very bad as it encouraged him.
Can you guess where we were? I will give you some more clues in my next post.
I hope you have a fun day. Take care.
Love, Anne x

2 thoughts on “The Island”