Metro into Porto (hotel is really a business hotel, so although it’s comfortable, it’s a long way from the ‘touristy’ stuff). We walked past the postbox sculpture where we posted our postcards – have a sense of doom about those cards. Saw a shop which sold tins of sardines. Just tins of sardines. The tins were brightly coloured and dated, right back to the early 1900s (I am hoping the sardines inside did not also date back that far). They were intended as gifts, due to Portugal being a centre for sardines, but at 7 euro each, they were a bit too expensive a novelty for me. Shame, Mum likes sardines and her postcard is probably lost forever.

Pizza lunch in a café that had nice pizza, but no light in the ladies loo. As in, no light – not a missing bulb, there was no fitting; which with no window either made for an interesting experience.

Went on a ‘free’ walking tour (you pay whatever you feel the tour was worth, at the end). Met Pedro, our geographer-turned-tour-guide. He was interesting, with some good sarcastic humour, though not especially friendly. Part of the tour was to a student café, which is called – in Portuguese – ‘Head lice café’. Pedro can say “head lice” in 26 different languages. Useful skill.

We also saw two churches, built almost – but not quite – touching. The Catholic church doesn’t allow churches to have adjoining walls (why?) so between the two churches was a narrow house. This is possibly the inspiration for Sirius Black’s house in the Harry Potter stories, as J. K. Rowling lived in Porto for a while. We saw the queue of people waiting to pay to go in to the bookshop which is thought to have inspired her moving staircases, and the Diagon Alley shops. J. K. Rowling has clearly been good for Porto. So too, is Ryan Air, as apparently before they began cheap flights to Porto, no one ever visited the city. This might actually be true, because many of the nice restaurants were fully booked, and it was often hard to find somewhere to eat.

There are more tourists than the city is quite ready for. The prices are also low at the moment – how long before they catch up with demand, I wonder? Visit Porto soon, before it gets expensive; but book your meals before you go!

Pedro told us that there is still some poverty in Portugal, a remainder from the days when it was a dictatorship, and people were encouraged to have big families, little education, and mainly farm for a living. He said the statue of a blindfolded Lady Justice, with her folded scales, show how the law courts functioned under the regime. Portugal had a peaceful revolution, and it’s now a democracy. It is also very hot, and a 3 hour tour was slightly too long for me.

We went to McDonald’s to recover. It used to be the Imperial Restaurant, and has chandeliers and art nouveau decorations. It also has dirty tables and disgusting toilets, so I didn’t like it. 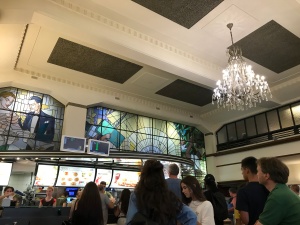 Metro back to the hotel.

Our next stop is Lisbon. If you sign up to follow my blog, you won’t miss it.

Anne E. Thompson is an author of several novels and one non-fiction book. You can find her work in bookshops and on Amazon.
Thank you for reading.
anneethompson.com

Woke 7am. Weather is cloudy—hope no one notices.

Metro into Porto. Wandered down to the river, which is very pretty. Crossed the bridge to Gaia after lunch. Eating here is very difficult, as all the restaurants seem to be fully booked or closed. Which then makes you wonder why the ones with vacancies have vacancies.

On the bridge a young man was standing on the balustrade, wearing swimwear, waiting to jump. Gradually, a crowd gathered, waiting to watch. Would he plummet to his death? Be run down by one of the large pleasure boats passing beneath the bridge? Or dive spectacularly and emerge on the bank? I think none of the above. When a fairly large crowd had gathered, a group of his friends passed amongst them, asking for money. I never saw him jump and I think it was a scam. Later, a different young man was standing there, waiting to jump. Perhaps I should have pushed him in.

The Gaia side of the Douro river is the north side, so it gets less sun. It’s where all the port cellars are. We saw the signs for Taylor’s, Graham’s, Cockburn, and Calem’s. We had a tour of Calem’s. Tour guide was very witty. At the end, we sat and tasted three different ports ( a proper, small glass, of port, so a proper taste not just a mouthful). This was great fun, we each liked a different port, and one of us drank rather a lot by the time he’d finished off all the glasses that other people weren’t keen on.

We then left, via their shop (not stupid the port-making people). The port was much cheaper than you can buy it in England, and came in nice gift boxes and bags, so we all bought some as gifts. I’m not sure that it all actually made it back to England with us, but I won’t say any more about that. It was an excellent afternoon.

Portugal is one of the main cork growing places in the world. They are trying to increase the popularity of cork by using it for products other than wine stoppers. So as we walked around, we saw lots of shops selling postcards made of cork. We all bought one for our mothers/partners who are back in England. We passed a postbox with a fun sculpture next to it, so took lots of photos and posted our cards. Then we worried that the postbox was just part of the sculpture, and not a proper postbox at all. Tried to retrieve cards, but it was impossible. All the post-offices in Portugal seem to be yellow–so why would there be a red English postbox? I fear we may never see those cards again.

Walked back to the metro and stopped for ice-creams. When the train arrived, there were lots of people, so I quickly jumped onto the train, the doors shut, and the train set off. I then realised I couldn’t see any of my family, and I had no idea of which station I needed to get off at, or how to get to the hotel from the station. Felt rather abandoned. (When the children were small, I had strategies for this sort of disaster—now they are all super-competent, they sometimes forget me.) R sent me a message, telling me which carriage they were in, and which station to get off at. Found them. Will keep a closer eye on the group in future.

I had a nap, while the males tried to book a restaurant for dinner. The males failed. It was raining (raining!) so we got taxis back to the cathedral. (The cathedral didn’t get a mention earlier, because I didn’t like it.) Walked to several fully-booked restaurants. Found one, next to the river, with okay(ish) food and okay(ish) service. No one got food poisoning, which is the main thing.

Walked back to the metro in the rain.

Thank you for reading anneethompson.com

Another instalment of our holiday in Portugal will be posted soon.

We had planned a family holiday for the last two weeks of August. As the date grew nearer, the whole of Europe was gripped in a heatwave. We watched as temperatures in Portugal went over 40, and saw wild fires on the news. All rather a worry.

We met R at the airport. J had been helpfully sending her updates on our progress (wrong airport, earlier flight, left already) but we managed to meet her at the bag drop.

All good with the flight. I sat next to M/factoid boy, and therefore knew lots of facts about Portugal by the time we arrived. Some of these were interesting, for example, did you know that the Romans called the region known as France and Spain ‘Gaul’ and we were going to the area that was the main port, hence ‘Port-o-Gaul’? Or that, an exploring nation, the Portuguese discovered Newfoundland? However, after trying to establish a colony there they left, saying there was ‘nothing there’—hence name ‘Ca nada’.

We collected a car (smaller than expected) and drove to Sheraton Hotel in Porto. The hotel has a glass lift. It was quite noisy when my family went up in it.

We walked to the metro. Buying tickets was slightly more complicated than we first thought, as ‘number of tickets’ means number of journeys on a single ticket, not number of tickets. Once we had sussed that, it was very easy, though I’m not sure my family was the fastest user of the automatic ticket machines. We caught a train to the old part of Porto.

We ate ice-creams in Freedom Square. Factoid Boy ate custard tart, as this is apparently a traditional food in Portugal. We then wandered around, taking in the atmosphere. There were lots of cool designs done in tiles, especially the railway station (Sao Bento Station). It was built in 1916 (most of Europe was too busy that year to build fancy stations with tiled patterns).

Finally ate at A Despensa—a lovely Italian restaurant. It had a great atmosphere, and we all like Italian food. The only problem was the washrooms, which were gender specific but only inside the door.

Metro back to the hotel. Rather tense discussion about what time we would meet for breakfast. Went to bed, slept well. Holiday going well so far.

Thank you for reading. I’ll post another instalment of our family holiday diary soon. Why not sign up to follow my blog so you don’t miss it?